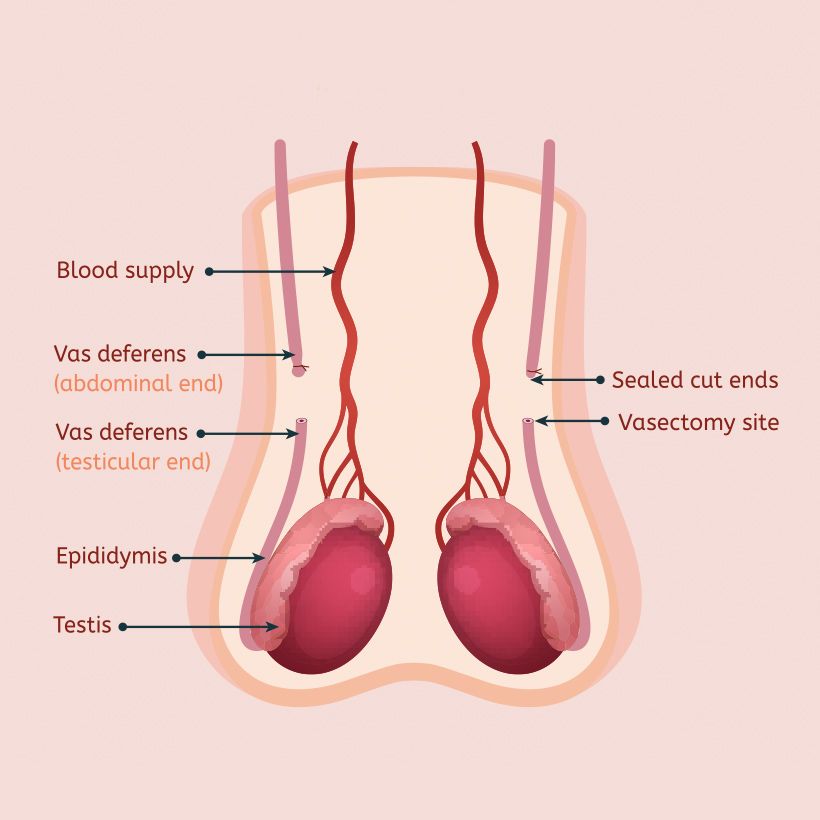 Vasectomy: A surgical procedure that severs the ducts that carry sperm from the testicles to the penis. A vasectomy is becoming one of the most popular methods of permanent prevention of pregnancy for modern couples. It is affordable, effective, and (especially when compared with methods available to the female partner) relatively free of risk.
​​​​​​​
Methods women can use to prevent pregnancy include:

Opening the abdominal cavity to reach and sever the tubes that carry eggs from the ovaries to the uterus}
In contrast, a vasectomy opens only the skin of a man's scrotum, through which the sperm ducts can be easily reached and permanently severed.

Male Anatomy: Sperm are produced in the testicles, which also produce the male hormone testosterone, which is largely responsible for male muscle and drive.

Sperm mature in a structure at the back of each testicle called the epididymis and travel on to the seminal vesicles, where they are stored in a nutrient broth.

During orgasm and ejaculation, the seminal vesicles contract and squeeze sperm out into the prostate, which produces the seminal fluid that floats the sperm along as they swim toward their target.

As ejaculation continues, semen is pushed into the urethra (the single tube which also lets urine exit the body) and out through the penis.
The tubes that conduct sperm from each epididymis to the seminal vesicles are called the vas defer ens and can be felt on each side of the scrotum.

Surgically severing the vas deferens prevents sperm from reaching the seminal vesicles and the prostate. It does not stop the testicles from producing sperm or testosterone. It does not stop the seminal vesicles and the prostate from producing their fluids. It does not lower sex drive and it does not change the nature of orgasm. It merely changes the content of ejaculation. In fact, many couples report that with the worry over surprise pregnancy remove, sex becomes more playful and spontaneous, and therefore ultimately more enjoyable.

Risks: As with any surgical procedure, there is a risk of swelling, bruising, and infection following a vasectomy, but for a person in generally good health, without any serious underlying conditions, the risk is minimal.

If you have diabetes mellitus, a problem with the heart valves, or a sexually transmitted disease such as Herpes, gonorrhea, syphilis, genital warts, or HIV, please let the physician know so that precautions can be taken to safeguard your health.

Also, please the physician knows if you regularly take Aspirin or a prescription blood thinner, if you have any know allergies (especially allergies to anesthetics such as Novocain), or if you have ever had any injury to the genital area.

Some studies have reported what seemed to be a slightly increased risk of cardiovascular disease or prostate cancer in men who have had a vasectomy. Other studies have found just the opposite. Feel free to discuss any concerns you have with the physician.

Deciding on Permanent Sterilization: Perhaps the greatest risk following vasectomy is that your life circumstances could at some point change, prompting you to want to father another child. Although vasectomy can in some cases be reversed, the reversal is not a simple, inexpensive procedure and the success rate is not particularly good. Therefore, the decision to seek permanent sterilization must not be made lightly. You and your partner should thoroughly explore your plans, your feelings, and your worries about this permanent method of sterilization.

The Procedure: During your initial vasectomy consultation the physician will have examined you to confirm that your vas deferens can be easily reached through a single incision in the center of the scrotum. He will prescribe a mild relaxant (Valium) that you should take a half-hour to an hour before your appointment. (Because the Valium will slow your reaction time, you should not plan on driving to or from your surgery.)

Start to finish, the whole procedure will take about 20 to 30 minutes. The procedure will begin with shaving the scrotum (if necessary) and then washing the skin with antibacterial soap. The physician will inject three spots on the scrotum- the center line and both sides- with Novocain. (This is the only painful part of the vasectomy, and feels much like the sting of having your mouth numbed for dental work.) The Novocain takes effect immediately, and though you will feel some pressure and an occasional "tug" you will feel no more pain.

The physician makes a single short incision in the midline of the scrotum (some of our physicians may make two). Through the incision(s) he locates each vas and brings it to the surface. A section of the vas is clamped off and removed, and the cut ends are cauterized. Each end is then tied off and sewn back on itself, making it highly unlikely that the ends could ever reconnect.

When the vas on each side has been clamped, cut, cauterized, tied, and sewn back, the physician settles the tubes comfortably back inside the scrotum. He then closed the incision with catgut sutures. (The sutures are designed to dissolve (on their own) in about three to five days.) The area is washed with hydrogen peroxide, an antibacterial ointment applied, and a gauze pad is placed over the incision. (It is to be noted that each physician does the procedure uniquely and should explain his process at the time of the vasectomy consultation)

With that, the procedure is over and you will be ready to dress and leave. Remember to bring or wear a jockstrap or tight-fitting jockey underwear.

After the Procedure: Your recovery will go smoothly if you use good judgment and follow this advice:

The green light: You will need to use some form of birth control until your semen has been confirmed free of sperm. Sperm produced before the vasectomy was done would have been stored in the seminal vesicles and could still be ejaculated and reach their target.

It commonly takes 10 ejaculations or more before the stored sperm have been completely eliminated. After the 10th ejaculation, bring a specimen into the office to be checked under a microscope. (We will give you the specimen cup. Make sure you label it clearly with your name, number, and date.) You will also need to bring in another semen sample between 3 and 6 months after the procedure to make sure the ends of the vas deferens have not rejoined.

Since the physician is looking for the absence of sperm, rather than for their health of vigor, there is no time limit on how quickly the specimen must reach our office, other than within a day or so.

Common Concerns: If anything is causing you real concern, please do not hesitate to contact our office.
Many men grow concerned when the catgut sutures dissolve and the incision seems to be opening up. Unless there is an increase in pain, bleeding, oozing, redness, swelling, or bruising, there generally is nothing to worry about. The skin of the scrotum heals quickly, and will shortly begin to knit together on its own, as would any cut, even without stitches.

Keeping some ointment and a small piece of gauze or a band-aid on the area will reduce any "prickly" feeling you may have during the healing process.

Many couples also want to know what happens to the sperm now that the testicles continue to produce. In short, when they reach the end of their normal life span, the sperm disintegrate into their component proteins and are reabsorbed by the body.

Occasionally a small "knot" forms where the vas has been cut. This is generally insignificant, but any unexplained lump should always be evaluated by your doctor.

Our physicians and staff are here to help answer any questions or concerns you may have regarding this procedure. 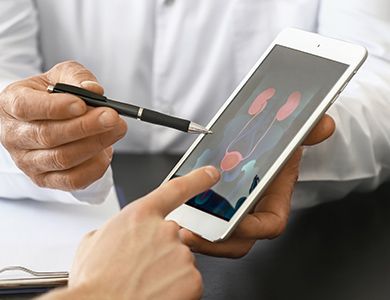 To Our Valued Patients:

As an essential business, LaPlata Urology Center remains committed to patient and employee safety as we navigate through the current healthcare crisis. We care deeply about patient health and have implemented several infection prevention measures to ensure the highest level of safety when you visit our clinic. Following guidance from the MN Dept. of Labor, MN Dept. of Health, CDC, and the American Optometric Association we are keeping a very controlled and safe environment for our patients and employees.

We've copied your review, after you click 'Publish' please paste your review by selecting 'ctrl' + 'v' into the review comments section.